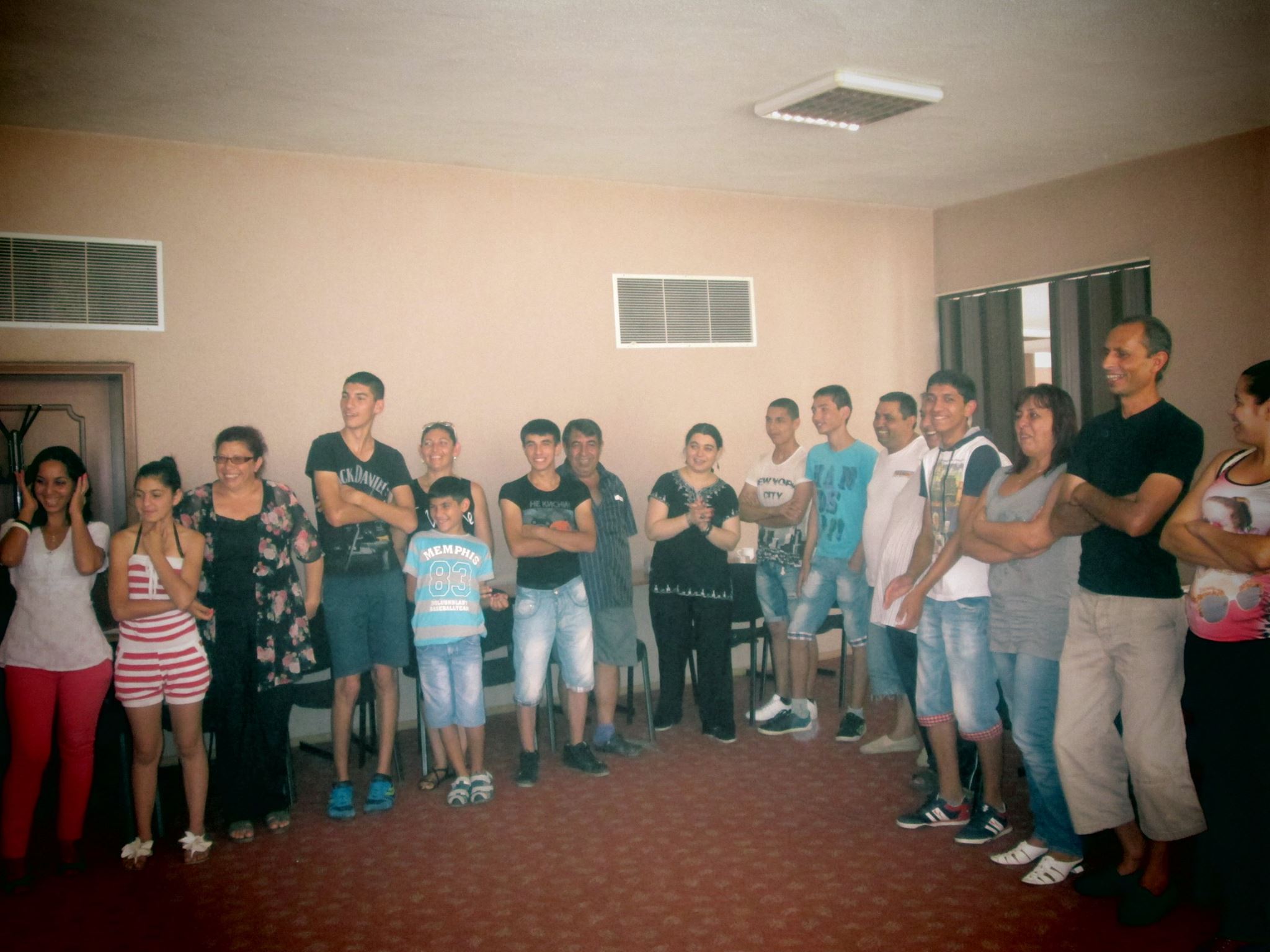 Center Amalipe together with other civil society organizations, schools, young Roma people, Roma and Bulgarian students organized on 1st October a number of events in around fifteen cities and towns in Bulgaria. They are also a response to the events Bulgaria witnesses during the last one week, the wave of violence and hatred speech against Roma in Bulgaria. Our initiative is a response to the replaced message of the crowd shouting words of ethnic hatred and the attempt to present the latter as the “fair outrage of the masses”. 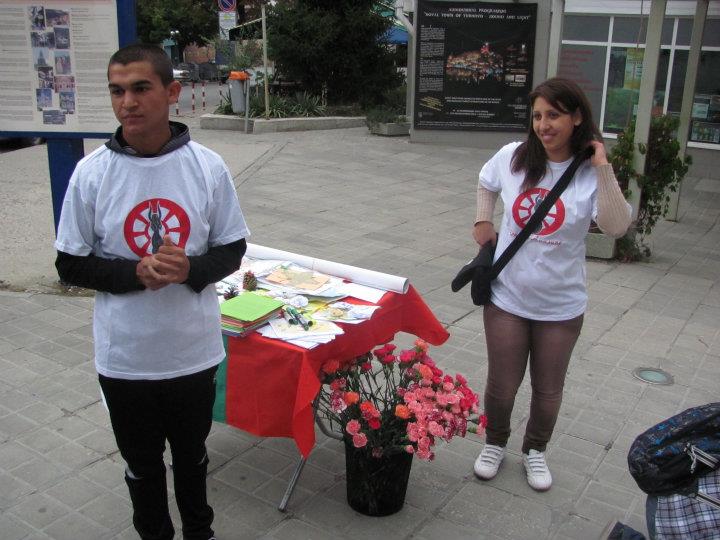 In the context of the events during the last couple of days we have decided that the Bulgarian Roma Pride would not be a march but something more… Our attempt was also to include many Bulgarians in these initiatives to show that ethnic tolerance is still a value in the Bulgarian society and that the sensible people in Bulgaria believe and are also proud of what Bulgarian Roma are proud of.

All the initiatives started at 11.00 a.m. on October 1st. A civic campaign “I have a dream: to study and live together” was one of the activities. It was organized by Center Amalipe in Veliko Turnovo and Strazhica (with the support of the two municipalities), by the National Network of Children in Sofia, by the primary schools of Tishvitsa and Banitsa and Roma medical students in Vratsa, and by Roma Lom Foundation in Lom. The activity was named “Tolerance fair.” In all the cities mentioned Bulgarian and Roma young people were giving the citizens a carnation (in analogue with the Portuguese carnation revolution), a drawing by a child, and an essay written by a Roma child for the future of Bulgaria. 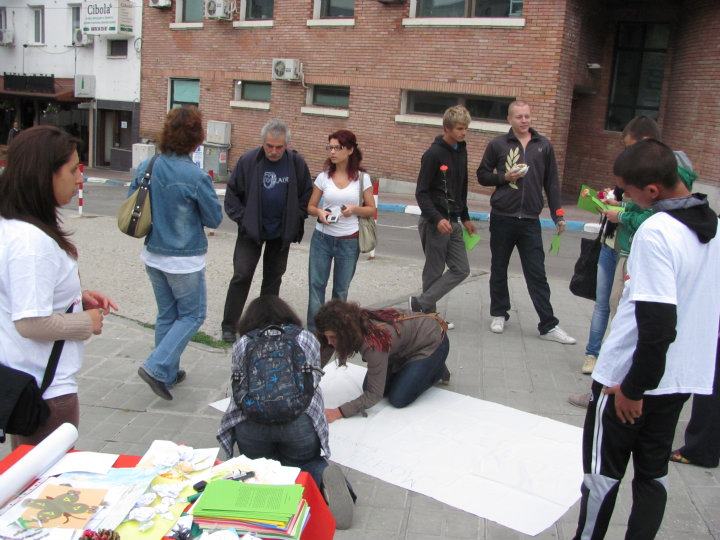 The citizens in response were asked to write their message for Bulgaria on a white sheet of clothe. Around 1000 carnations were given to the citizens passing by. Most of the people received them with a smile and the wish that more and more people join this campaign. This returned us the hope that the prevailing part of the Bulgarian society does not share and does not support the hatred slogans of the crowd. “In Bulgaria we all live together and the richness of the culture of every one of us contributes to what Bulgaria is” – wrote one of the people we met. Of course, there were people who had looked at us skeptically at the beginning but our volunteers, especially the Roma medical students and sincere words written by the Roma pupils quickly changed the skeptical glances.

In all the cities the event enjoyed a lot of smiles, warm words and wishes in contrast to the expectations for provocation and violence. In most of the cities the initiative was organized together with the municipalities and the support of the regional police department. 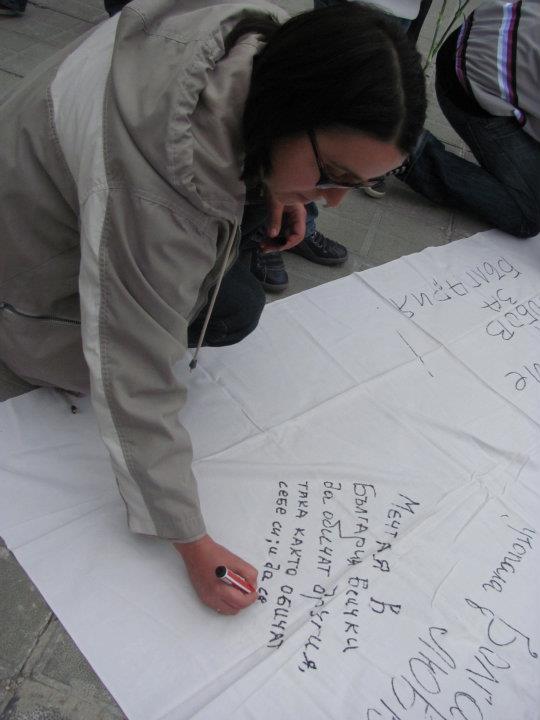 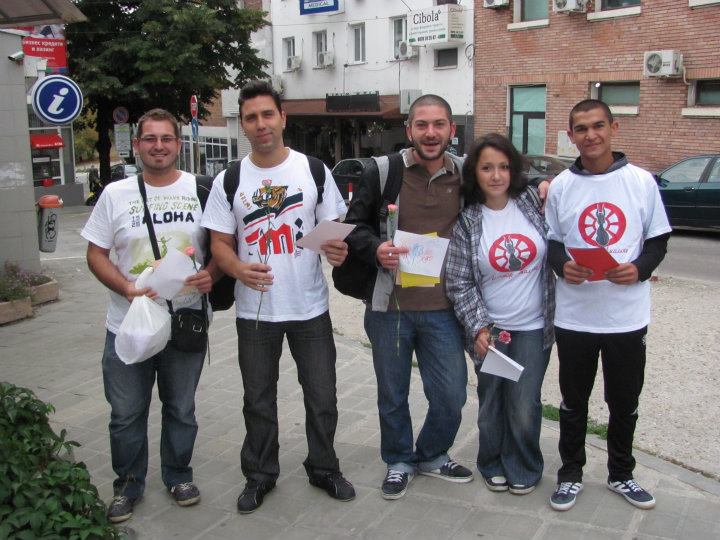 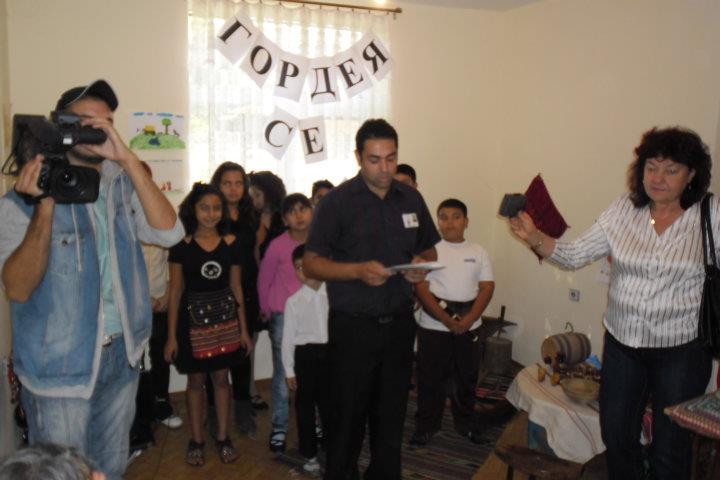 In Novi Pazar the residents of the city enjoyed an exhibition of traditional objects, showing decent work and culture of various ethnic groups in the country. Romani women prepared a traditional baklava recipe. The visitors learned about various Roma crafts and feasts. Roma children shared their dreams presented in the drawings. In Kameno where the exhibition presented traditional Roma crafts and the people showed how they used to produce artifacts such as spoons, spindles, etc. The visitors were so eager that long before the announced time, they were already before the court of the Community Development Center where the event took place. In Pestera in addition to the exhibition of traditional costumes and objects the event was attend also by the famous Roma boxer Serafim Todorov who talked about himself and his life. Separate section of the exhibition presented medals and pictures of the famous Roma choreographer Mancho Makarinski, founder 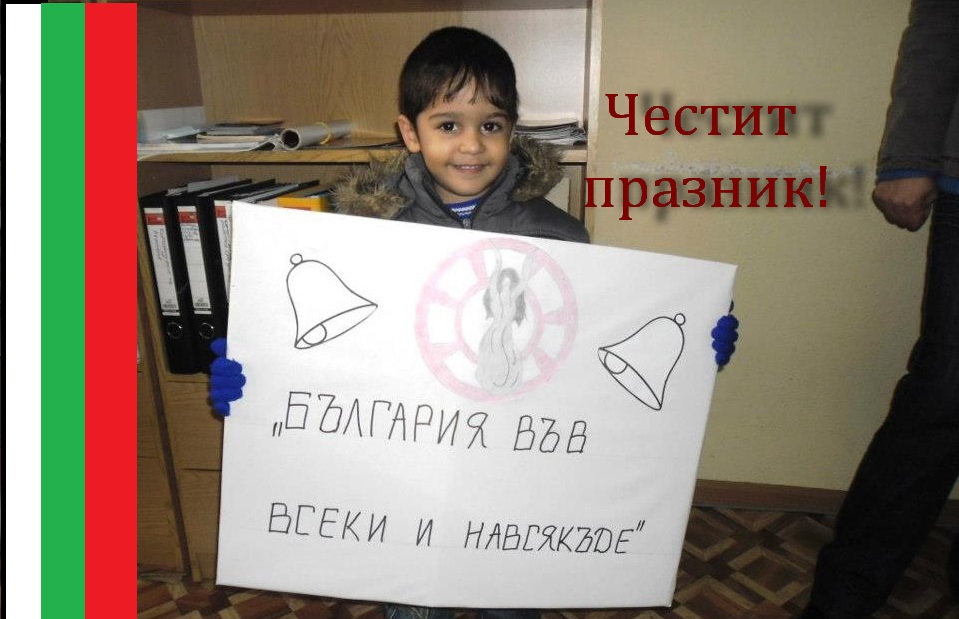 of Pazardzhik and Pestera dance ensembles which had won prestigious international awards. In Byala Slatina in addition to the exhibition "I am proud of…" showing Roma life and soul, the children of primary school "Hristo Smirnenski" presented poems, fables, and told different stories. Roma youngsters told of their desire to study higher education and are proud of the fact that their region is birth place of many Roma students and graduates. Old women told of traditional holidays and the way they had celebrated them. In Etropole the guests admired the traditional items, tasted the delicious polenta, prepared after a Rudari traditional recipe and an exhibition of children's drawings entitled "I dream about Bulgaria without violence" painted by children from Etropole Municipality.
Everywhere in the cities where the Roma community development centers had organized the exhibitions they were honored by representatives of municipal administrations, representatives of local government institutions, school principals, health services, kindergartens and social services. Everywhere the events enjoyed great interest from the local population: Roma, Turkish and Bulgarian community. The campaign joined both, young and elderly people. 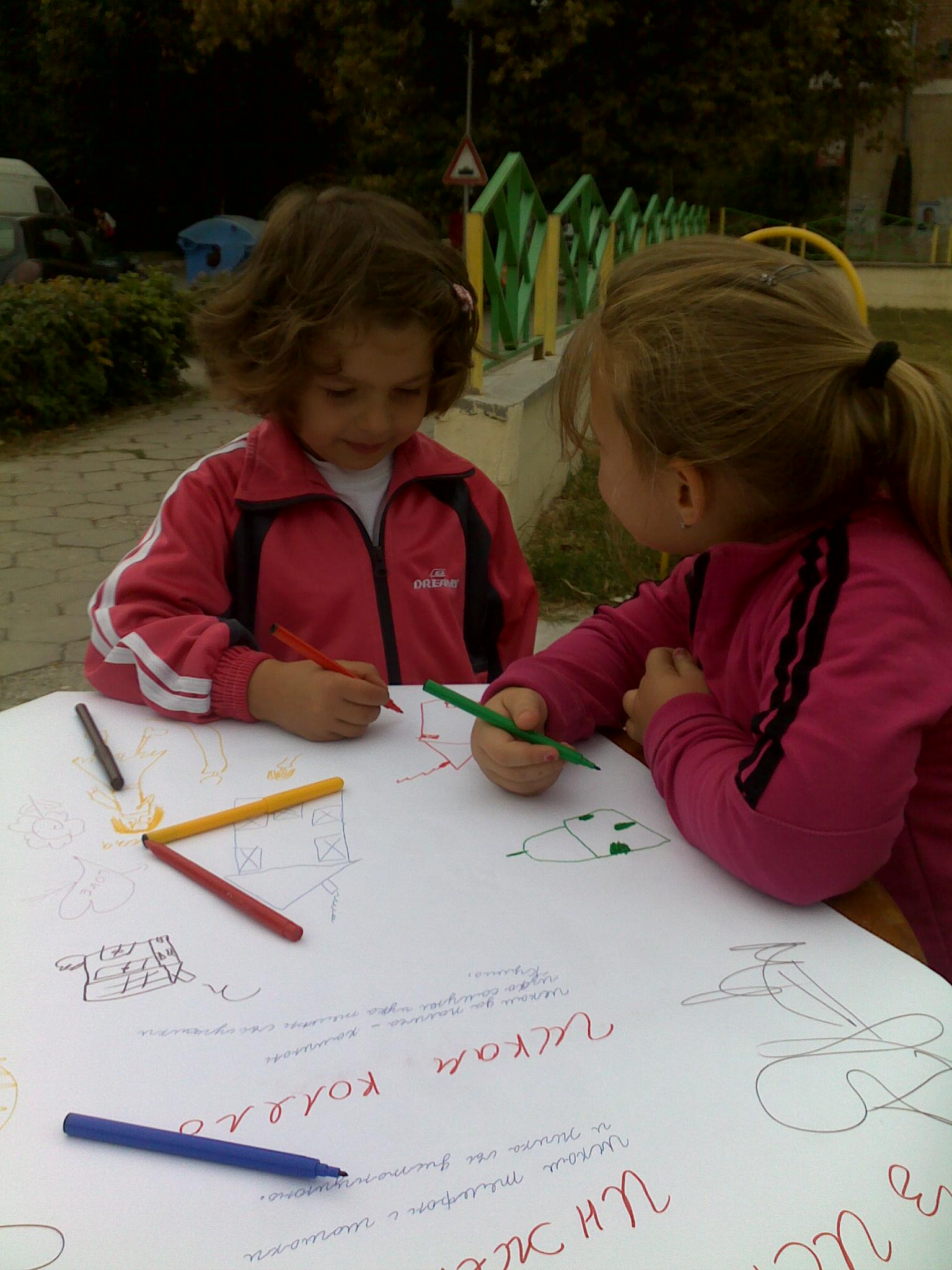 The idea of ​​the exhibition was to show what the Roma community could do; to show what Roma culture was and what we could be proud of; to show that we could be proud of the cultures of the different ethnicities and we could live together in Bulgaria. And as our community moderators shared: "That was really the way to get people from different ethnic groups together and to celebrate the Day of the Roma pride."
The visitors of the exhibitions in Kameno, Byala Slatina, Pestera, Novi Pazar and Etropole received also one drawing made by a child, bearing the campaign message. In response, they left their messages at our Tolerance fair. Here is what little Alexandra left us (6 years-old, Pestera): "My dream is that all people in Pestera are alive and well and love each other!" And this is Annie’s (7 years-old): "I am a small citizen of Pestera and my dream is love and understanding among all."

Many other schools, organizations and citizens joined the initiative promoting tolerance.

NGO "Public Education Council in the municipality of Gotse Delchev" participated in Saturday's initiative making TRAIN of TOLERANCE: pupils gathered on "Macedonia" square in Gotse Delchev (Blagoevgrad district). They cought each other hand in hand and crossed the entire main street. They gave the citizens painted smiles pictures with the logo of the campaign “To live and study together” painted by the children the previous days.

In "Ivan Vazov" School, in the town of Varshets (Montana district) students and teachers decorated TREE of TOLERANCE and put flowers with their names. The older students made a WALL OF TOLERANCE at the main entrance of the school with messages from each class in the school.

By creating the longest painting in Sliven children joined the national campaign "I Have a Dream: To learn and live together."More than 300 children were involved in the creative initiative which run along the main street of town. Daniela Nencheva - Director of "Dimitar Dobrovich" Art gallery in Sliven told Darik radio that with this act the children and citizens of Sliven wanted to support tolerance. By 11.30 length of the drawing has reached 200 meters.